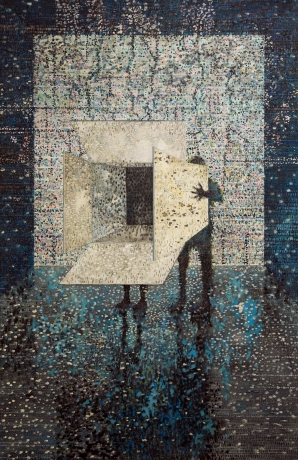 The Lure of the Dark: Contemporary Painters Conjure the Night

Sex, death, romance, magic, terror, wonder, alienation, and freedom: the night invites a myriad of often contradictory associations. For centuries, painters have been drawn to the mysteries and marvels of the night and its perceptual and poetic possibilities. From Rembrandt and his Night Watch to Georges de la Tour’s candle-lit scenes of the seventeenth century, James McNeill Whistler’s woozy Nocturnes, Vincent van Gogh’s dizzying Starry Night, and Edward Hopper’s lonely Nighthawks, artists have sought to capture the mood of the night. Of course, an exhibition about the night is also about the light that illuminates the darkness, from the moon and the stars, to candles, cigarettes, and the glow of cell phones. Many of the artists in The Lure of the Dark look back to predecessors, such as the Impressionists and Monet and Pisarro, to study the night en plein air, completing a painting in a single sitting or night. Featuring paintings — including new commissions — by a diverse group of over a dozen contemporary artists, including Patrick Bermingham, William Binnie, Cynthia Daignault, TM Davy, Jeronimo Elespe, Cy Gavin, Shara Hughes, Josephine Halvorson, Sam McKinniss, Wilhelm Neusser, Dana Powell, Kenny Rivero, and Alexandria Smith, The Lure of the Darkillustrates the ways in which the hours of darkness continue to provoke the contemporary imagination, providing apt metaphors for the diversity of human experience and the intersections of human experience along with the anxious tenor of the day.