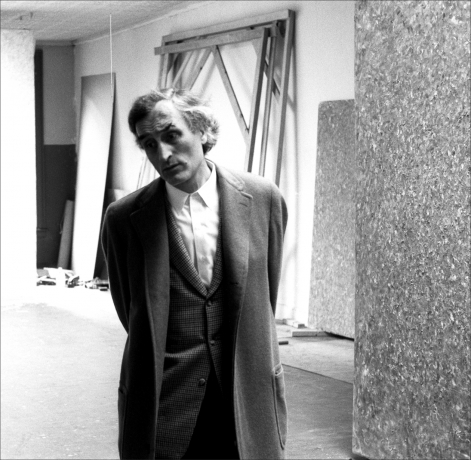 Van Doren Waxter is pleased to announce exclusive representation of the work of Milton Resnick (1917-2004). A first-generation Abstract Expressionist who is most known today for his later monumental, quasi-monochromatic paintings remarkable for their immensity and materiality. These works are held in public collections, including the Museum of Modern Art, New York, the National Gallery of Art, Washington, D.C., the Smithsonian Institute: Museum of American Art, Washington, D.C, the National Gallery of Australia, Canberra, and the Whitney Museum of American Art, New York.

A one-person exhibition will take place in 2022 at the gallery’s historic 1907 townhouse.

The gallery will seek to develop a wider audience for Resnick’s art and life in collaboration with The Milton Resnick and Pat Passlof Foundation, which exhibits, publishes, and preserves his work in the artist’s former home and studio on the Lower East Side of Manhattan. The Foundation opened to the public in 2018 with a fifty-year retrospective survey of his work.

In a decades long career characterized by revolutions, departures, and an obsession with paint—“paint, that’s all I have”—his practice included abstractions in the 1950s of interlocking forms that eventually became more rectangular and diagrammatic, to a focus on brushstroke in the 1960s, to an elimination of all line and imagery and all out embrace of scale, density, and surface from the 1960s to the 1980s, and finally a turn to figuration in the 1990s.

“We feel very honored to represent the very powerful, phenomenal work of Milton Resnick,” said Dorsey Waxter. “Resnick’s practice was continually evolving and he was deeply committed to oil paint and process. We look forward to introducing new audiences to the legendary artist of intensity and sublimity.”

“We know and respect Dorsey Waxter and John Van Doren,” said Susan Reynolds, executive director of the Milton Resnick and Pat Passlof Foundation, who added that the gallery will be invaluable in exploring the artworks which the artist produced in the late 1970s and 1980s, including the immense works that include the Elephant (1979-1983) paintings. “The range and diversity of the Van Doren Waxter program, their depth of knowledge and work with post war American Abstractionists and estates is very important to us.”

The representation will include a special and ongoing relationship with Miguel Abreu Gallery located at 36 Orchard Street and 88 Eldridge Street directly across from the artist’s foundation. In 2018, the gallery mounted a large-scale exhibition of the artist’s paintings on paper.